LQQKER INSIDER
LATEST UPDATE:
Protalix adjourned (read: canceled) their annual shareholder meeting after failing to secure enough votes to increase their current stock float.  They have rescheduled this meeting for May 13, 2018.  If the vote fails to pass by this next date, expect another extension.  At some point, the company may issue a more dire warning in order to get its message through... vote "FOR" the increase in authorized shares or it could jeopardize our very existence.

UPDATE: Above WARNING was issued by PLX in an 8k filing on 04.02.18. If vote to increase number of authorized shares fails, turn out the lights. Protalix will not literally go out of business, but you'll soon witness very bad things.
​PLX will dilute shareholders whether the vote passes or not.
Company is extending you an olive branch along with a warning... vote "YES", or else.
Don't say LQQKER didn't warn you.  Don't say Protalix didn't warn you.
This is NOT a game! This is VERY serious sh*t! You are playing with FIRE!

NOTE:
If you've already voted "AGAINST"  but would like to change your vote to "FOR" the increase in shares authorized, you can simply go back to the email proxy you probably received from your brokerage and change your vote. Otherwise, you can (per today's 8-K) call
1-833-501-4837 and ask to speak to a Shareholder Advisor.
This months after-the-fact topic: PROTALIX (PLX)
The RED FLAGS:
1. Company is calling shareholders begging for affirmative vote to increase share count by 40%.
2. Company forced to do "road shows" to increase awareness.
3. Moshe Manor - 41 months after becoming CEO, 38 months after announcing company focus to switch to bio-betters, 14 months after promising new indications in 2017... has yet to bring anything new to the table that didn't exist prior to his arrival.
4. Final results on PRX-110 and OPRX-106 were less impressive than interim results.
5. Grant from Cystic Fibrosis Foundation for PRX-110... denied!
6. Brazil... now not living up to their 2nd agreement with company (for Uplyso).
7.  198 employees that... do what exactly?   Suspected "Friends and Family" work-from-home or sleep-at-the-office employment structure.
8. Knight Therapeutics Inc - dumped all their shares after stating they wanted relationship with company and access to their pipeline.
​9. Company is on Adam Feuerstein's radar.
10. Institutional ownership at/near lowest levels in over a year, at 4.77%, per NASDAQ.
11. In Dec 2017, Company changed/amended section 10.07 of the Base Indenture originally signed with creditors in Dec 2016... appearing to tinker with the "Make-Whole" provision in a way detrimental to shareholders by 50%
12. Part-Time CEO Moshe Manor doesn't even reference having an association with Protalix (past or present) on his Linkedin page.
The LQQKER VOTE:
Though now holding 0 shares, I was holding on the date required in order to secure the right to vote​.
(Trust me folks, if you don't vote for the increase in shares, you will getting something much worse in return) 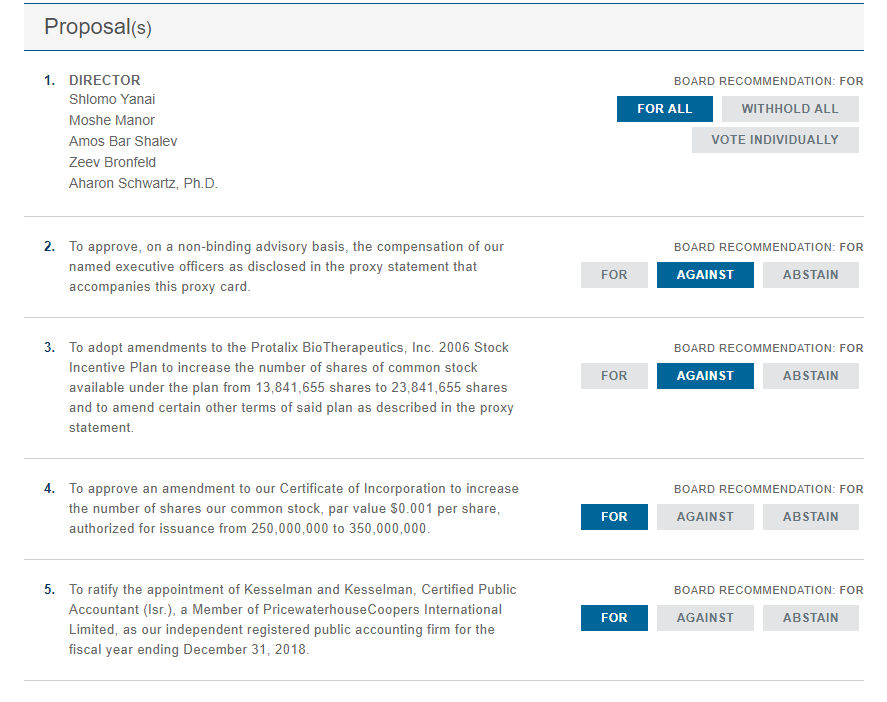 The LQQKER ALERT:
Could this alert have saved YOU tens of thousands of dollars? 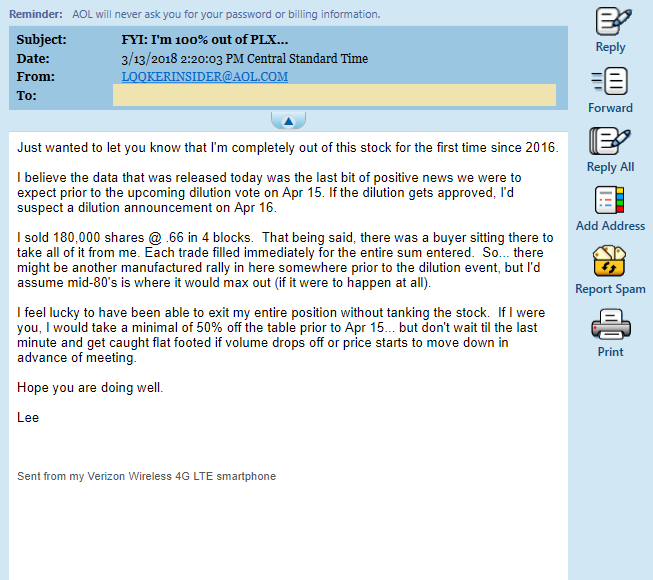 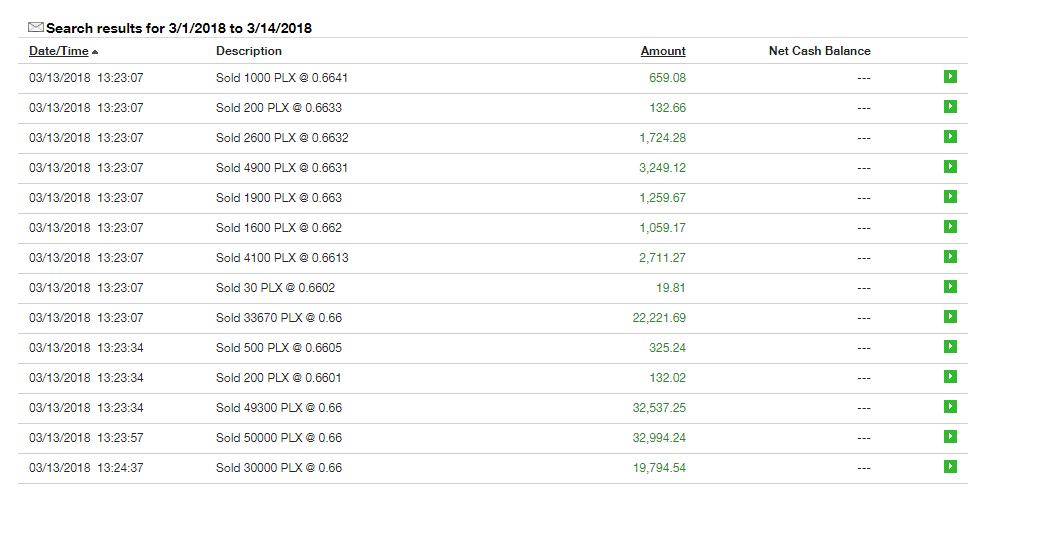 I entered PLX in mass in Dec'16 after the company refinanced their debt and raised capital.  By early April I was up between 300%-400%. Then came Adam Feuerstein on 04.12.17. I immediately began writing covered calls and would continue to do so for the next 10 months. I collected premiums per share that now add up to more than the stock price itself. By the time my last batch of options expired in Feb'18, the price of PLX had come down so much that writing options was no longer feasible. I then started to looking for an ideal time to dump all my remaining shares ahead of the upcoming dilution vote. I figured this opportunity would come with the updated OPRX-106 data readout. That news would arrive on Mar 13, a few weeks earlier than expected. It was done! I was no longer a PLX shareholder for the first time since Dec'16.

(In case you missed it, here were my thoughts on Protalix in January)
I have also ﻿published﻿ the information you are reading here to Seeking Alpha, but with additional commentary.